PROBLEM CONTEXT:  As failure is known to be an orphan and success becomes a progeny of many parents, finding the real parameters of success of any organization in claims of published stories, is not an easy task. Long-term survivability could itself be a parameter. Irrespective, financial performance is considered the de-facto representation with robust performances year-on-year. The 5th wave however created peculiar type of companies – unknown to previous wave world - first the Internet based dot com companies and then the platform companies.  When the world transitioned from 4th wave of innovation to 5th wave of innovation (1985-1995) driven by software and digital networks, it led also to a new ability to collect and store customer, processes and employee interaction data.   Given the availability of data, combined with easy availability of personal computers, data-base technologies and spreadsheet packages performance evaluation scope of a for-profit organization, its metrics and mechanisms for evaluating them through data-processing systems, expanded to include non-financial metrics such as customer satisfaction, internal company process-efficiencies, employees performance and response times of various client facing services. The Enterprise Resource Planning (ERP) systems helped in massive transformation through integration of broken stand-alone enterprise processes.

Given the deeper understanding of last 30 years with newer, faster and more robust technologies and understanding of social-networks embedded within any formal human organization structure, many new views have emerged that points to potentially different metrics on hitherto unknown and unknowable phenomenon of human interactions and performance that contribute to success or failure of a company.

As we have stated and claimed, that the world is undergoing a new churn or creative destruction through newer technologies (Industry 4.0 and Sixth wave of innovation) that started impacting around 2015 and will be deepening through 2025, will there be new metrics of corporate success that will emerge? What will they be, if yes? If no, then will these technologies be just add-ons or incremental to already existing 5th wave technologies?

PROBLEM (s):  An assessment method (s) is needed to answer (a) are these changes really creative destruction of the type/kind we experienced and that have been detailed for periods 1945-1955 and 1985-1995? (b) What are these technologies and how they will impact the ways and means to create economic value through the existing “company” structures? (c) the Algorithmic companies, read google, amazon, uber, facebook, etc, utilized the new resource – the algorithms to create new value. The exclusive use of the new resource – the algorithms – turned out to be a strategic surprise for the energy-matter-electricity based companies of 4th and 3rd wave. Will the new resource of (i) algorithmic intelligence and upcoming (ii) quantum computing change the nature of the company as a vehicle for value creation to the same or more than the extent the algorithmic companies changed the energy-matter-electricity resource-based companies? (d) What will be the new phenomenon by a 6WoI company that we need to measure and how? What will be the changes in the 6th wave to the existing phenomenon of 4th and 5th wave companies that need to be assessed and how? How will existing phenomenon of value creation morph in the 6th wave through new technologies of algorithmic intelligence and quantum computing? (e) What are the dimensions of user/buyer/customer value that will change in 6woi? What existing dimensions will morph and what dimensions

2. 6WoI companies may actually be run-time integrators of multiple companies, platforms and systems that are unimaginable as of now – new lenses (theoretical) and practical may be needed to discover and apportion fair and real value of each player who provides the final service or product to the customer who may never own it.

3. 6WoI companies will be in complex interplay of Employee-Bot systems working with Customer-Bot systems – these interactions will require multi-dimensional mechanisms designs and operational orchestrations that will need newer ways to measure them through newer metrics.

One can have multiple scenarios of future studied as 1-3 above (which are anyway not Mutually Exclusive and Comprehensively Exhaustive). I propose, we will revisit this problem after few more themes are explored, problems discussed and our understanding of 6WoI and its impact gets crystallized. I believe this problem is too early to be discussed at this point. I would definitely like more understanding and deeper view.

About the Author Navneet Bhushan (Navneet) is the founder-director of Crafitti Consulting. He is the leading expert on innovation and principal author of Strategic Decision Making- Applying the Analytic Hierarchy Process, Springer-Verlag, UK, published as part of the Decision Engineering Series and featured at the Harvard Business School. He consults on strategy, innovation, military/defence and intellectual property. He can be contacted at navneet.bhushan@crafitti.com.

In the year 2006, Germany declared the move towards Industry 4.0. It was the advent of radically different technologies - distinct from the previous three Industrial eras. The Industry 4.0 was considered to be driven by the Cyber physical systems. Contrast this to Industry 1.0 – start of the industrial revolution of using water/steam powered production; Industry 2.0 of mass production and use of electricity at the start of 20th Century; and automation through computers in Industry 3.0 in 1970s. The Cyber Physical Systems (CPS) consists of interoperable and integrated Internet of things, computation, networking, and physical processes that cooperate with each other and with human beings in real time. 9 key technologies underlie CPS - Autonomous Robots, Big Data, Augmented Reality (AR), Additive manufacturing (3D printing), Cloud Computing, Cyber Security, Internet of Things (IOT), System Integration and Simulation. The call to Digitize the Manufacturing Sector started emerging, soon after. Digital Factories was the result - to use, adapt and adopt the industry 4.0 technologies to carry out existing factory functions per se. In further evolution of the terms – Digitize also expanded to Digitalize the processes.

To Digitize means creating a digital representation of physical objects. There is a “transformation” of physical objects into data. The physical object itself doesn’t get changed through this process. The aspects and information contained in the physical object or relevant to its identity and understanding, gets converted to data when it is digitized. The Digitalization was defined to reflect the transformation or enablement of a business process using digital data and digital technologies (for example, process for booking an airline ticket). The process is automated with no or minimum human intervention when it is digitalized. In a way it is changed or transformed to its digital version as conceived by the process-designer within the constraints of existing technologies and digital data that may be representing the physical objects in their digitized avatars.

Although Digital Transformation has its roots in Industry 4.0, it is being applied to all kinds of businesses and organization. It indeed has become a buzz word since 2014. A generic tongue-in-cheek view of the term Digital Transformation is - continuously changing your business through emerging technologies. On success in some dimension, one can claim and call that the entity is “transformed” to be "the Digital" that “we always intended it to be”. And if new technology emerges again - one starts the journey again.

TRANSFORMATION, REPLACEMENT and EVOLUTION Replacing something is easier than transforming it. To transform an entity, one needs to keep its identity same yet change some part of its structure or enhance its structure by additions or deletions to its anatomy yet make sure that it is not destroyed, not loses its erstwhile identity. Replacement implies changing the older with the newer. Ideally, a digital factory could be designed and developed as a stand alone digitized and digitalized model of the existing unit and once the digital system is working one can discard the old purely physical factory.

Modelling and Simulation is one of the established methods to study any system for the purpose of evaluating its performance and also studying changes to the system. Over the years, simulation techniques have improved and now become close to replicating the physical systems and dynamics in models of sufficient details. There is an emerging paradigm of “digital-twins” as a means to move towards “digital transformation”. Evolution implies changing by replacement and/or through modification of certain internal sub-structures or the way these structures are organized to perform a specific set of functions. From the above, the replacement or big-bang one-shot transformation may happen, though rarely.

Three - Zations of Chinese Military In the 1950’s Chinese People’s Liberation Army (PLA) proposed Mechanization as its “transformation strategy”. In 1990s, a new transformation term “informationization” of PLA was declared in the software driven 5th wave of innovation. Recently, PLA announced that “mechanization” has been complete/accomplished. A Transformation initiative started in 1950’s has been accomplished in 2020. Clearly transformation is evolutionary not a big-bang organizational disruption. The clarity of goal-setting is visible in the way PLA decided to call it as informationization. One must see that these two -zations have come to PLA as a follower of western transformation. The third transformation that PLA announced in 2019 - Intelligentization is when China will lead and drive the technologies as well as the transformation. China has announced to accelerate the integrated development of mechanization, informatization, and intelligentization. There is an objective lesson for others to understand from a nation that has been accomplishing long-term strategies in a consistent and persistent manner. Transformation is hard/difficult/destructive BUT Long term clear and unambiguous functional goal-setting and pursuit through evolutionary explorations to find the paths towards the functional goals, continuously transforms in a robust or even anti-fragile (systems that gain strengths from harmful impacts) manner.

What is Digital Transformation then … ? It is a vague, marketing term given by “American’ way of salesmanship. It encompasses various proposals to current known ways, existing and emerging technologies, and experiences, to accomplish embedding more “information” and more “intelligence” into the existing systems (both human and mechanical systems) to monitor, exchange, convert and process different operands for which the system exists – matter(objects), energy, value (money), information and upcoming ideas, emotions, beliefs, intentions, thoughts, etc (in no particular order). It is a bit of a misnomer – both from “digital” and “transformation” perspectives. The Chinese articulation as integrated paths towards mechanization, information embedding and making systems intelligent as the three dynamic, evolving and amalgamated movements ahead –seems to be more appropriate. The STEMIL (space-time energy-matter information and life) being Changed (C) through Mind (Thought Consciousness and Power) (TCP) was what I called STEMIL-C-TCP model.

About the Author Navneet Bhushan (Navneet) is the founder-director of Crafitti Consulting. He is the leading expert on innovation and principal author of Strategic Decision Making- Applying the Analytic Hierarchy Process, Springer-Verlag, UK, published as part of the Decision Engineering Series and featured at the Harvard Business School. He consults on strategy, innovation, military/defence and intellectual property. He can be contacted at navneet.bhushan@crafitti.com. 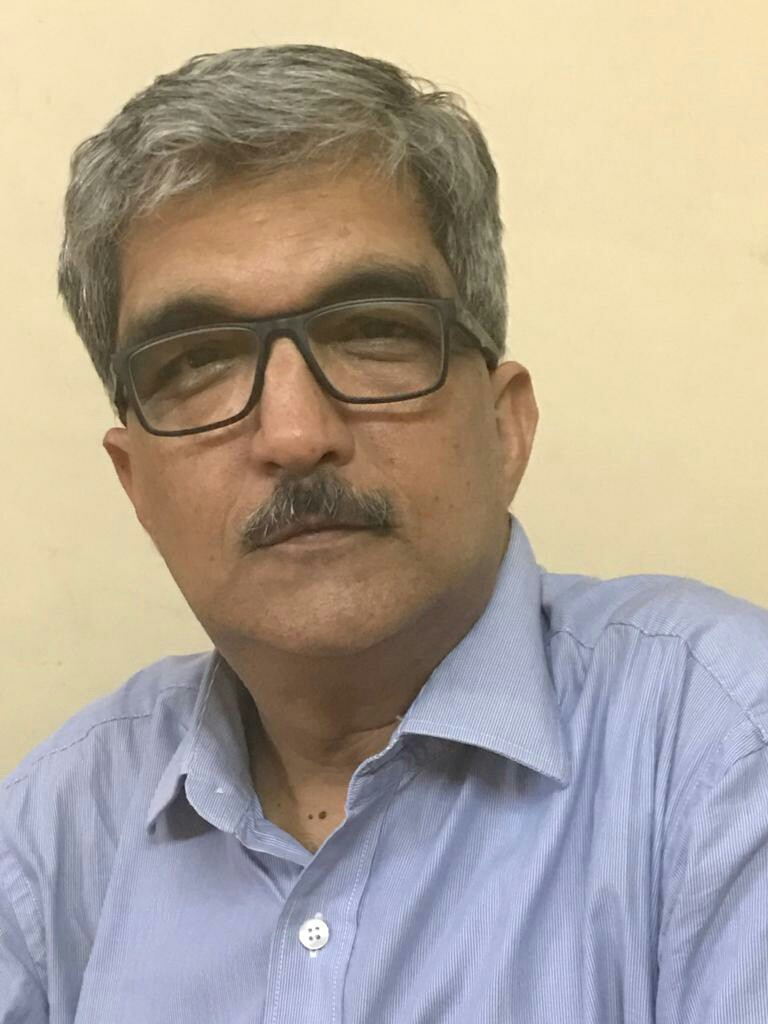