5Ps of starting something new

If you want to start something new - what you should have
1. Passion Long term sustainability will require passion - Passion creates a momentum in you that overcomes all possible naysayers and inertias of why something will not work
2. Patience Take it that there will be delays, difficulties and outright demeaning people - with smiles that means mockery - however please also remember - each such smile - also hides a fear - fear of "if you succeed..." then those smiles have to become awe ... To override all these smiles - build patience in your system
3. Perseverance King Bruce and the spider - will start making complete sense to you - there is no other method than learning from spider - on rebuilding your net - again and again even if you keep on failing.
4. Planning is actually an essential activity. Even if innovators may not understand it. I suggest a minimum level of planning is essential - key list of activities and follow up on them over a period of time - makes sense
5. Pride is something that I learnt recently. I somehow never thought about pride in doing what you are starting - actually Pride in doing the change is so important that it can actually lead you to build on other Ps.
So if you want to create change in the world that you want to see - build on 5Ps!
Posted by Navneet Bhushan at 11:59 AM 2 comments: Links to this post

Email ThisBlogThis!Share to TwitterShare to FacebookShare to Pinterest
Labels: 5Ps of starting something new, Entrepreneurship, How to Innovate

PART I: THE WORLD OF GLOBALIZING INNOVATION COMPLEXITY

3. Techniques and Methods of Choice Crafting

21. Blueprint for a Future-proof Enterprise

Posted by Navneet Bhushan at 6:50 PM No comments: Links to this post 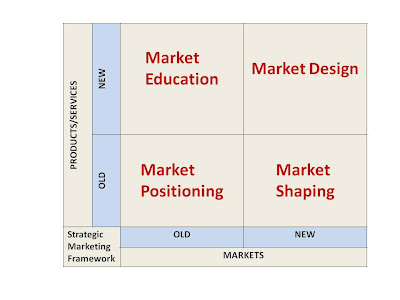 The 2 dimensions of this model are

Product that you want to launch - is it NEW or OLD?
Market that you are Targeting - is it a NEW Market of OLD Market?

If you launch an Old product/service in an Old Market ` You have to think about Market Positioning as the market already has many such products/services - You are one more player in a crowded space. This is also a RED OCEAN. Example ~ You have to launch a SHAMPOO for Urban population.


If you launch a New product in an old market - you need to get into Educating the Market.


Finally, if you are launching a New Product in a New Market - It is an Inventive process/ Design process - you need to Invent/Design the Market

Posted by Navneet Bhushan at 3:18 PM No comments: Links to this post

Sometimes back in response to a news item about Alan Turing HERE I wrote following post at a social networking site on Ning - this is a TRIZ India site.

Alan Turing suffered because he was homosexual - Altshuller was put in gulag because >>>>?? - why Stalin put him in jail

May be some people can answer? I am not very convinced that because he discovered patterns in patents that he was put in gulag.

May be a higher question - from Socrates, Galileo, Gandhi Turing, Altshuller - anyone who comes with a change - and influential change suffers at the hands of people who win in the status-quo, they are typically very powerful - powerful enough to create large roadblocks - Innovators have to have social resolve to ride the powerful waves -

How TRIZ thinking can potentially address this?

According to a popular myth Altshuller was imprisoned and sent to GULAG by Stalin because of creating TRIZ or discovering the patterns of inventions. It is not true.

Here is my translation of several fragments from Leonid Filkovsky's article "Life of Altshuller" (originally published in Russian - http://www.metodolog.ru/00058/00058.html ):

"Soon after the Second World War, the USSR government agreed to give away the German patent library in exchange for the German equipment for metal processing and printing. Altshuller was against this decision and criticized it. He said that all this equipment would become outdated twenty years later but all the patents would only start being useful. He wrote a letter about it to Stalin and distributed nineteen copies of the letter two different organizations such as central Communist Party Committee, Youth Committee, newspapers and so on. But he never got a response. Instead he was arrested since he was accused of anti-Soviet propaganda. ...

The official accusation consisted of five articles. ... The first article was about selling the government secrets abroad. It was based on the invention by Altshuller and Shapiro to use airplane tires for storing oxygen. ...

The third article was regarding anti-Soviet propaganda. An impostor carefully recorded on paper his talks with Altshuller and Shapiro and KGB made conclusion that they were very dangerous people for the Soviet government. ...

The article number four accused Altshuller of establishing an anti-Soviet organization. Three persons would be enough to create such organization because it could be very small in the beginning and then it could grow and finally destroy the government. ....

Article number five addressed illegal storage of weapons. This was the only correct article and Altshuller recognized himself guilty. When Altshuller was studying at a flight school one of his friends who later died during the flight gave him the gun as a gift. "

Thus as everyone can see, Altshuller's imprisonment had nothing to do with TRIZ but mainly for critisizing the Soviet system which at the time was enough to be imprisoned.

This is great - really great information about Altshuller. There is lot of loss in history as we can see - people who write history - write as per what they perceive.

I request your permission to use this information and the reference material in my presentations on TRIZ. People somehow didnt believe that mere letter explaining patters in patents will lead to imprisonment. I wanted to know more relevant info.

Thanks for this - I owe you a bottle of wine - when we meet next :)

I presume people who cant read or write russian (which includes me) would love this piece of history in the life of Altshuller!
Posted by Navneet Bhushan at 10:17 PM No comments: Links to this post