Most of us are workers. Working in some organization - large or small. We have been continuously advised from our childhood to have common-sense. To use common sense. The common sense is the established responses - the standard responses to predefined situations or scenarios in specific culture. The culture may be of your home, your family, your community, your city, your country, your region or the established culture of your company.

To operate in the standard/normative word, our seniors, our teachers, our parents - in fact everyone - stress the importance of Common sense.

Below we just explore the three other categories that are shown on two axis of Common-Uncommon and Sense-Non-Sense. In fact, to our surprise and shock - we can see - it is the other three set of people - who actually dismiss common sense or utilize the common sense of common man, who are controlling, changing and in fact defining our world.

The two axes of Common-Uncommon and Sense-Non-sense clearly divide the space of all people into 4 categories. Most of the us - the common man - can be classified into the Common-Sense quadrant of the 4 parts. We all are being designed to follow the common sense. 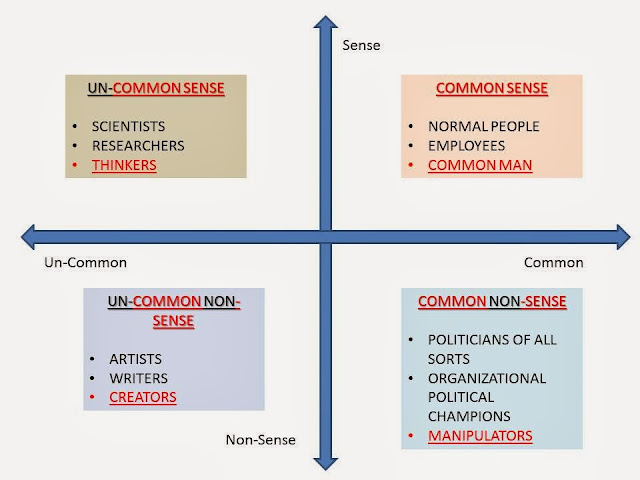 COMMON SENSE: All workers of an organization, citizens of a nation, the common-man is suppose to follow the COMMON-SENSE.


COMMON NON-SENSE: By exploring and becoming master of common Non-sense, one can become master manipulator. The Politicians the Organizational Political Champions - the Super Managers who keep on rising fast in pyramidal organizations all fall under this category. Common man with common sense can not become a politician. You have to develop common Non-sense. In fact, it is the best method to become the elite, the Difference. The Controller of Common Man.

UN-COMMON NON-SENSE: Creating the new world of imagination. creating flights of fantasy - exploring the non-sense in uncommon ways is the forte of the Artists, the Story-creator, the Fiction writer, the Painter. The uniqueness unimagined comes from the Artist. The Artist gives multiple meanings to non-sense - usually an uncommon meaning. The Artist feels. Uses his imagination, intuition and to a great extent struggle continuously to wriggle through the uncommon nonsense that he finds himself invariably.

In fact, if you really want to be different - explore non-sense in uncommon ways - become an artist, or make uncommon sense of the world around you - to become a Scientist. Finally, the easiest path is to utilize the human weaknesses of greed, envy, ego and idealism to exploit the non-sense in common ways to become the politician. If you are not interested in either exploring the non-sense or not doing it in uncommon ways - then continue the path of common sense - and be the common man - that the environment has and is hell-bent on designing you to be!

Posted by Navneet Bhushan at 7:46 AM No comments: