Winning the Asymmetric Wars - Matrix of Instruments of War

{*** The article below has been published at Indian Defence Review now. Please see HERE


Winning the Asymmetric Wars – Matrix of Instruments of War

The three steps include the discovery of adversary’s strategy. Whether it is belonging to one of the two clearly demarcated Toft classes, i.e., indirect or direct. The second step involves creating and executing the most appropriate counter strategy that should be in the same class as the adversary’s. Finally, as the opponent changes its strategy from direct to indirect strategy, or indirect to direct strategy, we need to adapt by shifting our strategy to the same class as is done by the adversary. As per Toft, Symmetric Strategic Interaction is the key for winning the asymmetric wars for the stronger player. Of course, for the weaker player it has to be asymmetric option. Toft’s book was published in the year 2005. Since then a new term has emerged called the hybrid war. The hybrid warfare combines regular war with irregular warfare and cyber warfare. This three-domain war (3-Domain war), as one can see, requires a peculiar blend of conventional, special ops, irregulars and cyber/information warriors that conventional armed forces are typically unable to provision because of the siloed way in which these forces have been designed and developed. A cunning and agile adversary, focused on achieving its political and military objectives can combine the three domains in an eclectic game, that the regular conventional forces, with their linear thinking and capabilities, are not designed to even comprehend, forget about playing it.

The asymmetric warfare and its evolved form – hybrid warfare - comprising regular, irregular and cyber/informational warfare – is markedly different as the type of conflict operations that get created in the hybrid war bear almost no resemblance to the warfare by and against regular armies that we designed the armies for, in the first place. Secondly the key instruments of such operations – instruments of war - are typically infantry or humans trained to operate variety of small arms in a brutal manner. The capabilities of armor, artillery, air force and even cruise missiles are suddenly rendered tangential as the weapons used are crude IEDs, AK47s, grenades, and suicide bombers. Sun-Tzu, the military philosopher from ancient China, told that the superior militarist spectrum of attack starts at the strongest if it is carried out when the enemy is still laying out its schemes. The next best stage is to attack enemy’s alliances, then comes the attack on adversary’s army, lowest is to attack the city and last resort is the seize of a city. In the terror inducing option, the attack is always on city to create a long-lasting picture in the mind of the population and the government of the country. As a tributary strategic flow the armed forces and economic assets are destroyed to induce terror. The non-state actors have been created, employed, evolved and engaged to carry out inciting insurgency, widening local fracture lines, creating ideological substrate to build monuments of terror movements that not only lasts long but have a much lower cost in terms of option of political deniability and utilization of disgruntled and frustrated youth in the adversary’s society – especially in developing economies.

By design, hybrid war, however, avoid military to military confrontation, as far as possible. Further, the weaker actor in the hybrid war, uses all its instruments of war at the time and place of its choice selectively and in complete synergy. Although the effects appear disparate initially. The agile switching and synergistic utilization of different instruments of war is the strategic architecture of Hybrid War actor. The traditional warrior or the strong actor with its conventional, large military and bigger economy, comprehends the attacks in silos and responds in a piecemeal manner. That is where the asymmetry gets created and impacts the stronger actor’s chances of win, negatively.

India is fighting Hybrid War by its adversaries.

Since 2008, China has not only become more assertive but it has created aggressive designs and actions in its quest for new type of superpower by 2050. The architecture that emerged is President’s Xi’s “Marshall Plan” as designed in One Belt One Road (OBOR) with its key leg in China Pakistan Economic Corridor (CPEC). The OBOR is rapidly engulfing and entangling India. One can see the rapid implementation of OBOR as I described in a previous article here.  What is emerging slowly but surely is the increasing Chinese influence on Pakistan – militarily, economically, politically and even infrastructural. This peaceful and friendly engulfment of Pakistan through various instruments has many ramifications for India and the world at large. The friendly takeover of Pakistan by China is a potential scenario that India should analyze and either proactively counter or be prepared for costly reactive repairs after the events.

In a recent article published at National Interest, the hesitancy of US army and politicians to have certain thresholds of military operations above which they will go to the force-on-force combat where they have considerable capability and advantage has been mentioned. The article says below that threshold Russia and China have played the asymmetric war options with considerable success. In fact, American Strategic predictability as articulated in its considerably open assessment reports has become an input for others to design their asymmetric wars. Interestingly, India has always been maintaining a much higher threshold to responding by force-on-force military options – first due to inherent ideality of its ideological political philosophy and later constraint by the escalation spirals to nuclear conflict as communicated by others.

Irrespective of the fate or evolution of Sino-Pakistan nexus and emerging geopolitical axis, India has been subjected to a hybrid war by Pakistan based jihadi and terror groups for many years now. Pakistan, along with its “all-weather friend” China, has created and used instruments of war in the asymmetric/hybrid spectrum to a considerable success. India has not responded to various instruments of hybrid war for the simple reason that we neither have designed, developed and nor integrated these instruments in a spectral spread of potential options space in the asymmetrical/hybrid war. Instead India has been creating options, capabilities, structures and doctrines in the conventional warfare space, that too in a fledgling on-off way – be it the so-termed Cold Start Doctrine against Pakistan or Mountain Strike Corps against China. In contrast, our adversaries are not only crisp, clear and confident, in not only articulating their instruments/doctrines/strategies but developing them in full public eyes of the international community – for example, Pakistan’s Tactical Nuclear Weapons as reflected in the 60Km NASR create a new option between the conventional and full-scale Nuclear war, in the shining glare of international community.

As I have mentioned in the previous article that India has been facing an asymmetric war/Hybrid war – a new type of war, and we should address that by calling it a War, albeit a different kind of war. The problem is acute, as we do not have clarity on distinct nature of various instruments of hybrid war that form the full spectrum. Each instrument has a specific role that requires an orchestration of these instruments through a centralized algorithm through an agile conductor. That Pakistan and its deep state conducts with glee and enthusiasm as they are focused on conducting it with clear strategic vision and objectives.

Matrix of Instruments of Hybrid War

In the emergent matrix of instruments of Hybrid War, India has not only failed to recognize, articulate, communicate, and respond to the hybrid war unleashed by Pakistani deep state and its sponsors, but has been completely unmindful of all spectrum of hybrid war instruments that need to be responded to through creation of corresponding instruments of hybrid war or counter-instruments. This has resulted in an overload of responsibilities and need for deploying capabilities for which our conventional forces get assigned for which they never were designed.

The matrix below is just an illustrative way to study the interactions and formulations of instruments of hybrid war and highlights the doctrinal or instrumental lacuna in our force/response structure. It can be extended and developed further with due diligence to create a response envelope that will cover the full spectrum of hybrid war/asymmetric war that we are fighting for so many years, but with limited instruments of conventional wars that we have designed our forces/instruments for. It indeed is a challenge but one that we should have designed much earlier.


A rather updated version of the matrix of instruments of war with authors gut feeling of Indian capability vis-a-vis its adversaries is in the figure below. 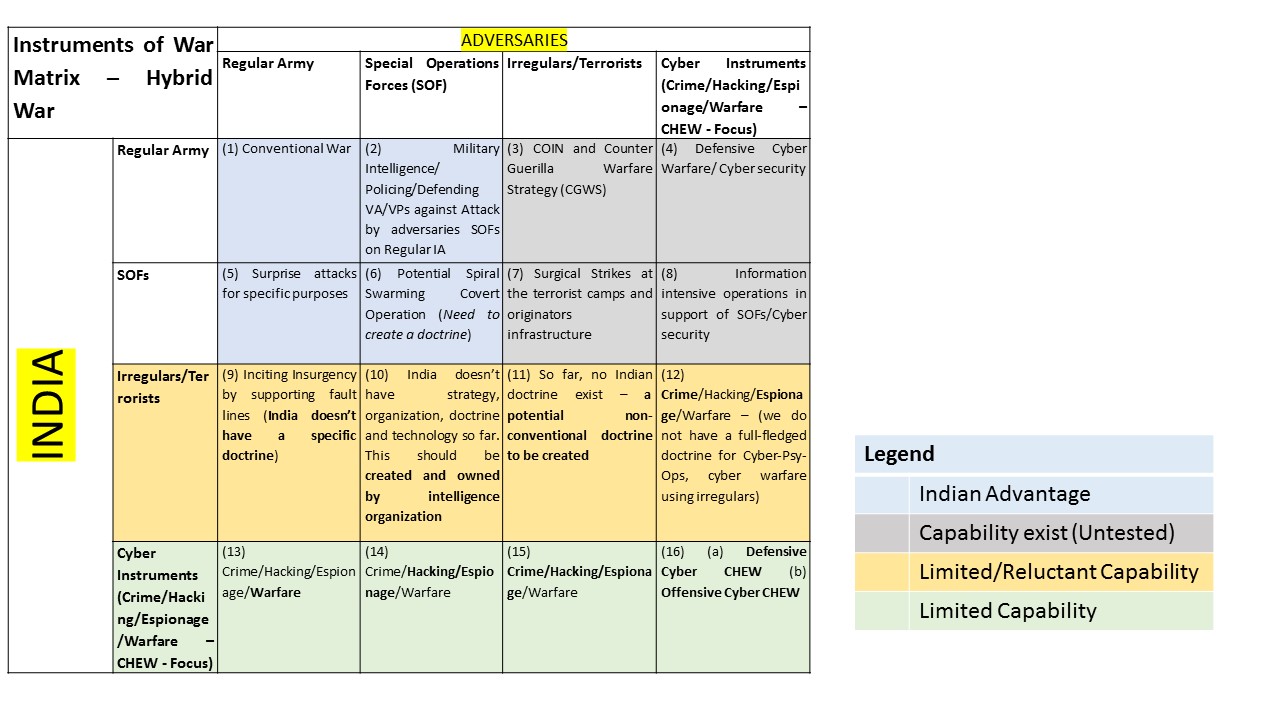 One can observe that the matrix shows 16 elements or interactions of 4 instruments of hybrid war from Indian side and 4 instruments of hybrid war from adversary side. To read the above matrix, if we trace the Indian regular army row (1st row) and Adversary’s regular army column (1st Column) we get the element (1) which is conventional war between two regular armies for which India is not only well trained and prepared but has comprehensive superiority over Pakistan and a sufficient parity against China. If we move to say element (3) which is adversary’s irregulars/jihadis/terrorists attacking our regular army, we have learnt the insurgency and counter insurgency ops paying heaving price of loss of our soldiers. It is the elements (9), (10), (11) and (12) i.e., India using its own irregulars to fight adversary’s army. Special operations forces, irregulars and cyber instruments that we simply do not have a doctrine, a strategy or even an instrument in place.

The Rapid Strategy Switching, as proposed earlier, requires availability of full spectrum instruments of hybrid/asymmetric war. Even if some instruments are partially developed, their doctrine and employability should be conceptually developed. When the adversary (especially an asymmetric adversary attacks – indirect or direct – the stronger player need to switch the counter attack from impending asymmetry to a symmetrical attack. The orchestration of instruments of hybrid war to switch the strategy is of paramount importance. India need to fight this new kind of war with a holistic command and control system that orchestrate all instruments of hybrid war – regular forces, irregular forces, special operations forces and cyberwarriors into full-spectrum responding force that can switch its strategy rapidly.

Conclusions
India has been subjected to war and we need to fight it as such. However, this war is a new kind of war. It is different and we not only lack all instruments of this asymmetric/hybrid war that our adversaries have developed over the years, but we do not have clear theoretical basis/understanding of fighting this multi-domain war. In this article, we have proposed two key concepts – (a) a matrix of instruments of Hybrid war and (b) a mechanism of rapid strategy switching to win the asymmetric wars. We believe a comprehensive framework combining these two key concepts can give us directions to not only think but create a comprehensive full spectrum response to respond to this new kind of war, as a war. It is imperative that we must develop the full spectrum hybrid war understanding and create a robust response.

Posted by Navneet Bhushan at 3:35 PM No comments: