The Un-edited draft posted below

Kathmandu University - School of Management (KUSOM) is conducting a course on decision making and using my book on Strategic Decision Making - Applying the Analytic Hierarchy Process as part of the course taught by Mr. Shashi Bhattarai. The book was published in January 2004 and now has been referred to by many research papers and journals!! 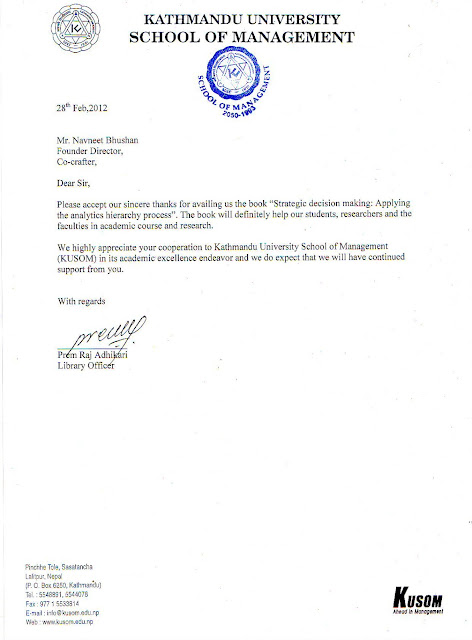 You can teach me conformance, discipline, practice, load my head with facts, figures and what not - But please don't take away my imagination - because after you all are finished schooling me - that's the most precious thing I have to come back from the layers and layers of education that you encased my heart in!

Posted by Navneet Bhushan at 10:41 AM No comments: Links to this post

Email ThisBlogThis!Share to TwitterShare to FacebookShare to Pinterest
Labels: education in Co-creationization, Imagination, Inventors into innovators

Dear Members,
Greetings!!
MMA conducts one day workshop on
A Framework for Innovation
Facilitator
Mr Navneet Bhushan
Founder Director of CRAFITTI CONSULTING
Date
Friday  23 March 2012
(09.30 am - 5.30 pm)
Venue
Hotel Deccan Plaza
36, Royapettah High Road, Chennai - 14
Overview:
The globe is being re-engineered rapidly. Our businesses of today are not what they used to be even a decade back. Our existing methods of thinking – based on analytic and logical methods developed over last couple of centuries are suddenly looking in-effective in the new world of increasing globalization, increasing complexity and unprecedented pace.
The problem solver is in a complex web of decision dependencies and fuzzy end of decision complexity. This workshop gives a comprehensive exposition to Lean Inventive Systems Thinking (LIST) framework developed after successful experimentation in multiple domains. This is a potent framework for collective problem solving using five key thinking dimensions – these are Lean Thinking, Inventive or Design thinking and Systems Thinking besides the traditional Logical and Analytical thinking. It has already proved its worth in designing new products and services, improving overall productivity, reducing cycle time, designing relevant solutions needed by customers, generating Patentable Inventions and minimizing stress on the employees. Some of these cases will be shared in the workshop.

If you, your team, your organization or your business is
·        Impacted by rapid increase in Globalization?
·        Impacted by explosive increase in complexity?
·        Overwhelmed by continuous pressure to think “out of box”?
·        Faced with decision paralysis due to information de-coherence?
·        Feeling the heat of unknown competitors doing unprecedented things to eat away your business?
If most of your answers are YES, this workshop will help you find answers.
Do you think that
·        “Decision Making” is your one of your teams’ core strength?
·        “Problem Solving” and “Innovation” are embedded in your teams’ attitude?
·        Your team manages to avoid getting into crisis most of the time?
·        You know the value that you are creating or delivering to your customer?
If most of your answers are NO, this workshop will help you find answers.
Methodology
The sessions will be interactive. There will be sharing of knowledge by the facilitator. The participants will be engaged in discussions and hands on exercise. The sessions will be aided with ppt for better understanding of concepts and a workbook will be distributed to the participants.
About Facilitator
Mr Navneet Bhushan is a  Post Graduate Diploma in IPR (NLSIU, Bangalore), Diploma Patent Information (The Netherlands), M.Tech (Computer Science &Engg) IIT Madras, M.Sc (Software Science) Allahabad University, B.Sc (Hons.) Physics (Delhi University).

Mr NavneetBhushan (Navneet) is a founder director of CRAFITTI CONSULTING, an Innovation and Intellectual Property Research, Consulting and Training firm head-quartered at Bangalore, India.
Over a career spanning more than two decades, Navneet held positions such as Vice-President and Head (Innovation) with Hexaware Technologies, Principal Consultant with Wipro Technologies, CEO of CREAX Information Technologies Pvt Ltd., Technology Specialist at Philips Global Intellectual Property & Standards (IP&S) division, and Senior Research Associate with Infosys Technologies. Before joining the corporate world Navneet worked for more than a decade as a Scientist at Defence Research &Development Organization (DRDO). Navneet has extensive experience in the fields of Innovation, Patent Portfolio Management, Software Development, Management, Research, IP Analysis. He has been providing advisory and problem solving consultancy to variety of Industries in the decision engineering, Innovation, Intellectual Property and Information Technology landscape.
Mr Navneet has authored more than 65 technical research papers and articles in various International and National Journals, Trade Magazines and Conferences. He has spoken on innovation, patents, Intellectual Property, TRIZ and Strategic Decision Making in various organizations & forums. Mr Navneet has conducted TRIZ, Lean and Patent based workshops for more than 2000 senior and middle level executives of companies such as, HAL, LG, IOCL, Wipro, Honeywell, Infosys, Aditya Birla Group, ABB, GE, Hughes, Sharp, Philips, Thomson-Reuters, CavinKare, TVS Motors, Weir Minerals, DRDO, etc.
He is the principal author of Strategic Decision Making- Applying the Analytic Hierarchy Process published by Springer-Verlag, UK, as part of the Decision Engineering Series. The book has been featured at Harvard Business School working knowledge for business leaders. He is an associate editor of the International Journal of Analytic Hierarchy Process and reviews research papers for defence science journal. Navneet has been invited as an external expert for assessment board of DRDO Scientists and has participated as a facilitator for evolving citizen centric rural e-governance workshop conducted by IIPA, Delhi. Mr Navneet has been conferred Entrepreneurial Innovation and Leadership Award for 2012 .
Fee Details
Participation fee – Rs 2500/- plus 10.3% service tax per participant
Special discounted fee for MMA members Rs 2000/- per participant
The cheque/DD to be drawn in favour of ”Madras Management Association”.
Prior registration is necessary. The fee once paid will not be refunded; change in nomination from same organisation will be permitted.
The registration is through email and the following details is to be given for registration Name of the Participant, Designation, Contact No and Email id.
Look forward to the pleasure of receiving your nominations at the earliest.
Thanks for your continued support to MMA and its activities.
Kindly send your nomination to:
Madras Management Association
“MMA House” |  148-K Old Mahabalipuram Road
Thoraipakkam, Chennai – 600 097
P 2496 2766 | F 2496 2777 |M 9176665229
mma@vsnl.com  | www.mmachennai.org
With warm regards,
Gp Capt R Vijayakumar, VSM
Executive Director
Madras Management Association
Posted by Navneet Bhushan at 12:22 PM No comments: Links to this post

Posted by Navneet Bhushan at 12:04 PM No comments: Links to this post