THE PROBLEMS WITH SOFTWARE AND BUSINESS METHOD PATENTS 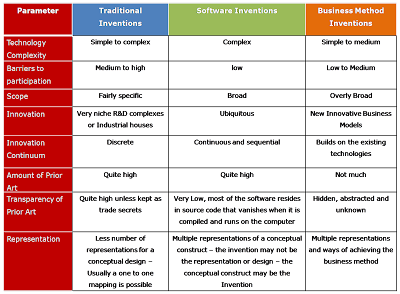 Why Software and Business Methods are different?

Software innovations typically have extremely fine granularity of code-level subroutines while business methods have a coarse level granularity. Although software patents and business method patents overlap and are often difficult to distinguish, they actually represent problems associated with opposite ends of the granularity spectrum. Table above depicts the differences between software inventions, Business Method inventions and other discrete technological inventions such as Chemical and Pharmaceuticals , where patent systems have stood perfectly well so far.

Business method patents as seen from the above analysis, are not only difficult to define, they are usually over broad. BMP also are not really known to foster innovation and creativity as they are not usually known or accessed by innovators in the field – thereby defeating the very purpose of Intellectual property rights. The fact that innovation in software is voluminous and incremental raises profound practical problems in administering the patent system. The ease of creating functionality in software means that there is a huge amount of prior art at all levels of granularity, much of it dating from the period before patents were routinely granted and much of it undocumented. The documentation in source code disappears when the program is compiled. Software is commonly designed to be intuitive and user friendly, so that it can be used without reference to documentation.

Posted by Navneet Bhushan at 11:25 PM 2 comments: Links to this post