Ron Simmer, the Patex CEO, publishes a Bizarre Patents Calender every year. I have received one for last 5 years that he has been publishing - the 2008 Bizarre Patent Calender, one can download from the site . In fact all calenders starting from 2004 are there at the site.

Some of the patents are absolutely amazing - look at which dimensions Human mind can go to. Consider for example the following one (More than 100 years old) - this has been liked by my ex-Boss and I just reproduce his comments without his permission:

Navneet:
My vote goes to … NOV08
I liked the illustration where the individual seems to be reinforcing “Aa Bail Mujhe Mar”. The kicker was not only the fact he turns on the apparatus himself but the blindfold may enhance his visualization J
Thanks

Initiation Device
US654611 July 31, 1900
Inventors: Edmund de Moulin and Ulysses S. de Moulin
First ever spanking machine! This invention relates to devices employed in initiating applicants for membership in secret organizations, and it has for its object to provide a device in the nature of a spanking machine, the construction being such that the applicant will be struck with a paddle and at the same time will be given an electric shock, the mechanism being thrown into operation by the applicant himself. 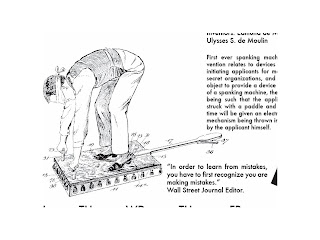 Posted by Navneet Bhushan at 5:57 PM No comments: