From 6-8 January I was invited to attend and speak at the Global IP Convention 2012 at New Delhi. I spoke on "Innovation Mysteries - Opening the Pandora's Box" - 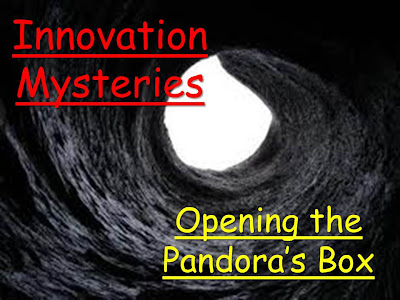 Innovation indeed is a Pandora's Box. The mythical character in Greek Mythology - Pandora was first woman on earth who was given a Box - and it was instructed that she should not open it. When she opened it, due to curiosity, as the myth goes,  all the problems of the earth escaped the box - teasing Pandora's on their way out. She tried to close the box, but in vain, except that she was able to close - when only Hope was still in the box.

Innovation today is a Pandora's box - and surprisingly everyone wants to keep it closed - lest it opens up the Innovation problems. Speaker after speaker talk about Innovation - no one actually wants to do it. Innovation is excruciatingly hard. It indeed is very difficult.  For the talk I listed down following 9 Innovation Mysteries - but there are more 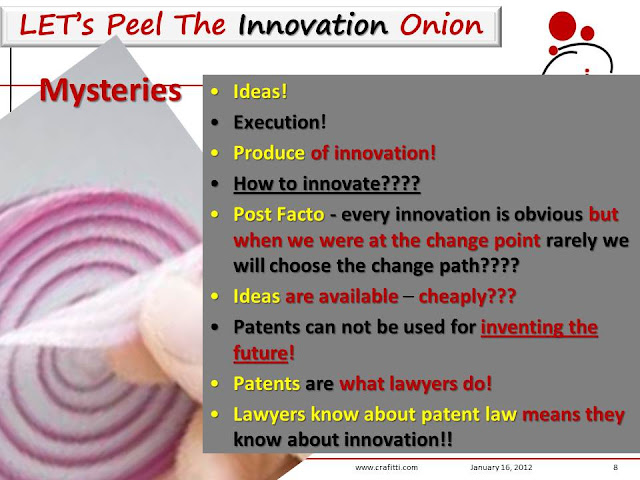 INNOVATION MYSTERY #1: Higher the position in a company, more the person talks about Innovation and less he actually do it. Why?

INNOVATION MYSTERY #2: Everyone is interested in produce of innovation but rarely people are interested in knowing how to innovate

INNOVATION MYSTERY #3: Most of us like to advise others on innovation - rarely applying those advisory principles on our own self

INNOVATION MYSTERY #4: Post Facto - every innovation is obvious but when we were at the change point rarely we will choose the change path

INNOVATION MYSTERY #6:  It is all about Execution!

INNOVATION MYSTERY #7: Patents can not be used for inventing the future!

INNOVATION MYSTERY #8: Patents are what lawyers do! 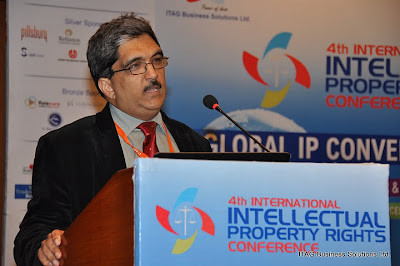 One can ask - OK - what are YOU saying?
What am I saying


Innovation is about CHANGE - and in my opinion the greatest definition of Innovation has come not from Steve Jobs (The current Fashioned heartthrob of  various Innovation Speakers - Please read Mystery #1 above) But - Surprise Surprise ---- ( from the old boring almost too much preaching - oh no - not again!) ... Mohandas Karamchand Gandhi (M.K. Gandhi) - In a remarkable quote - which in my opinion is really the key to Innovation he said

Posted by Navneet Bhushan at 8:44 AM No comments: