Defence for the $5 Trillion Indian Economy

Defence for the  $5 Trillion Indian Economy

The “challenging but realizable” desire/target/goal/ambition of India becoming a USD 5 trillion economy by 2024-25 from the existing USD 2.69 trillion economy, as articulated by our finance minister[1], is a worthy thought. Whether, how, and in what configuration (equitable or much more skewed wealth distribution that the existing data shows[2]) this journey will be performed, designed, muddled through or evolved, is not this article is about. What will it take to secure and defend a USD 5 trillion economy is what we would like to discuss? To get a sense of the journey ahead, lets us see what has been the journey of the past for Indian economy and effort and resources spent on defending the economy.

In 2009, India already was a more than USD 1 Trillion economy (1.078 trillion) for a population of 1.148 billion people. We were defending our economy by an annual defence budget of around USD 25 billion with 1.281 million active soldiers, according to IISS Military Balance. Table below shows how these 4 numbers changed by 2019 with one set shown for the year 2014. The 2009, USD 1 trillion Indian economy almost doubled to USD 1.97 trillion economy by 2014 with a defence budget of around USD 36 billion with an active armed force of 1.325 million soldiers. By 2019, these numbers have increased to USD 2.69 trillion, USD 58 billion and an active armed force of 1.45 million. The way India is defending its evolving economy seems to be by adding more soldiers and of course increasing the defence budget. In 10 years from 2009 till 2019 Indian Defence Budget has increased by 128% while number of active soldiers have increased by just 12%.

The world that is emerging in the period from now through 2024-25 is undergoing a multi-dimensional repolarization. For securing economic growth in the emerging world along with defending Indian rights, interests and sovereignty, will require us to not only put in more resources for defence but also rethink the security and defence architecture that we have been following. The repolarizing world is also undergoing a creative destruction to pave way for the sixth wave of innovation[3]. Further, the character of war is not only changing but also increasing into new dimensions[4] that will require new thinking, novel and innovative solutions to design and architect the security and defence of the USD 5 Trillion Indian economy. What could be our options for year 2024-25 USD 5 trillion economy security and defence architecture?  Before we try to answer this question, let us look at how the world economy evolved from 2009 to 2019 and how major countries have designed their defence and national security architecture in this period.

Various nations have taken different routes to their defence and security architecture and design as their economy has evolved. A look at 20 key countries including India in years 2009, 2014 and 2019 on 4 national level metrics available and published in open literature (IISS Military balance 2009, 2014 and 2019) gives a view of key approaches to defence and security architecture followed. The four key metrics that we have considered are – (a) GDP in Billions of USD, (b) Population in Millions of citizens, (c) Defence budget in Billions of USD and (d) number of active soldiers as part of the defence force in thousands.

In 2009, China had active armed force of 2.185 Million soldiers and their defence budget was USD 61.10 Billion for the GDP of USD 4.2 Trillion. USA with close to 3.5 times GDP of USD 14.5 Trillion was spending USD 693 Billion for a force of 1.54 Million soldiers. Russian GDP was close to what Indian GDP is today (2019 India is USD 2.69 Trillion). Russia was a USD 2.45 Trillion GDP country with an active force of about a million strong.  Russia was however spending USD 36.35 Billion on defence. Japan, 10 years back, was more than a USD 5 Trillion GDP and was spending USD 47 Billion on defence for an active defence force of just a quarter million soldiers.

At this point, let us look at Pakistan and Israel as two closer GDPs although not closer population sizes. In 2009 Pakistan had an active force of 0.617 Million soldiers with a defence budget of USD 3.56 Billion. These numbers increased in 2014 to 0.643 Million soldiers and a budget of USD 5.89 Billion. Pakistan’s GDP increased from USD 168 Billion to USD 193 Billion in the same period. Israel was a USD 195 Billion GDP on a base of just 7 Million population that became a USD 254 Billion GDP in 2014. Israeli defence budget increased from around USD 9 Billion in 2009 to about 15 Billion in 2014. However, the number of active soldiers in Israeli armed forces have not increased, remained at 0.176 Million only.

There is an interesting trend in 2009 to 2014 data on the 4 metrics that we have chosen to understand the defence and economy interplay if one may. Countries like France and Germany have actually reduced the number of active soldiers in their armed forces while increasing their defence spending slightly in 5 years from 2009 to 2014. Although UK has increased its active soldiers but given the general nature of these countries – UK, France and Germany have a reduced focused on defence spending – although their economies have also not grown to substantial extent. That is indeed true for Japan as well.


The 2019 data indicates a changed picture on these metrics for the 20 nations that we have chosen for our study. USA is now a USD 20.5 Trillion GDP. However, the defence budget has increased to USD 643 Billion but has not touched the high of 2009 when it was USD 693 Billion. The number of active soldiers have been reducing since consistently though. That indicates a rethink on how army is organized. The move from division-based army/US marines to integrated brigade-based organization that started in year 2003 might have some role to play in this reduction. Interesting China in 2019 has also reduced its active soldiers to close to 2 Million with further reduction in pipeline if the announcements and Chinese new thought is to be believed. However, for a USD 13.5 Trillion GDP which is similar scale to what US was in 2009, Chinese defence budget still hovers around USD 168 Billion unlike US that has been between USD 600-700 Billion. Russian GDP has reduced substantially to USD 1.58 Trillion and their defence budget has reduced to USD 45 Billion. The number of active soldiers however, have increased from 2014. 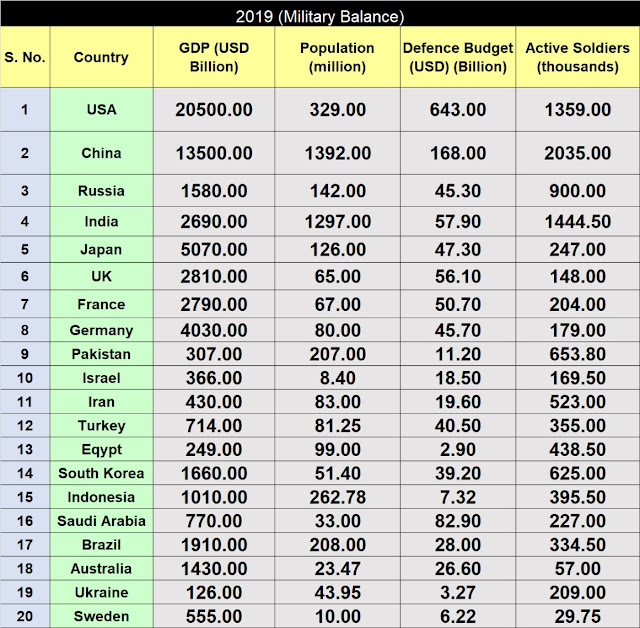 Pakistan has seen a peculiar case of slight increase in GDP from USD 193 Billion to USD 207 Billion but almost doubling of defence Budget in 2019 compared to year 2014.  UK, France and Germany have not only reduced their number of active soldiers, but also capped their defence budgets to 2014 levels. Israel with a tremendous increase in GDP to USD 366 Billion has increased its defence budget to USD 18 Billion but reduced its active armed forces.

2019 from 2009 indicates that defence architecture and design on an evolving economy is gravitating towards a new architecture that is evolving definitely not by increasing the number of active soldiers.

Indian Defence for a 5 Trillion Economy

We need a much deeper analysis to understand and find out what should be the key tenets of our security and defence architecture as we move towards a target of USD 5 Trillion GDP. If we compare ourselves with China in 2009 when it was a USD 4.2 Trillion economy it was maintaining a USD 61 Billion defence budget but with more than 2 Million soldiers. Are we also moving towards an architecture like China in 2009? This would mean that we would have a defence budget of close to USD 100 Billion for 5 Trillion GDP and also need to maintain an active army of 2 million soldiers.

If, however, we can learn from China since 2009, it is clear that a new architecture needs to be thought through. Analysis of evolution of Chinese defence white papers [5] indicate that India need to learn to move quickly to the “intelligent” warfare as China is calling the future. Further, we need to understand the phygital nature of warfare [6] (amalgamation of physical and digital warfare of the future). Chief of Army Staff, in a recent interview[7], has mentioned that our Army will not increase its number of soldiers further and will optimize its strength from within its existing manpower. If that is so, we need to see what are the ways that will lead to higher and deeper security and defence levels for India without increasing the number of active soldiers.

It is clear, as we grow to the USD 5 Trillion economy, we will need to invest more in capital intensive systems with high technology components in Space, Cyber and above all in Maritime capabilities. It will not increase the number of active soldiers but will require new type of soldiers for maritime, space, cyber and special forces. If we maintain the active soldiers to the current levels and say a maximum of 1.5 million active armed force and given the need to modernize our defence and security architecture, we need to reach the defence expenditure of USD 150-200 Billion by 2024-25 for the USD 5 Trillion economy. The challenge is to define, design and develop such a security architecture for 2024-25, today.