MEANING is the Next Killer App 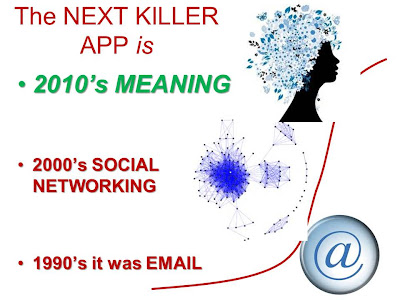 The Question crops up every time! What is the Next Killer App?

In 2002 I wrote a paper and developed a framework on identifying killer apps. In fact, the Killer Sure Score (KISS) of a proposed application was described in my book - Strategic Decision Making - Applying the Analytic Hierarchy Process as well. Despite researching, social networks, buddy finders, - I missed out including Social Networks as a Killer App - one must say, Social Networking has become a killer app with the combination of microblogging (read Twitter).

Is there a new Killer App - in this new decade - I think - it is "Meaning" - MEANING IS THE NEW KILLER APP.

"Meaning" is as varying as human minds - when every one is searching for meaning, everyone also wants to tell one's meaning of the world as well. The trends of attention economy, ubiquitous access, continuous redefinition of well-established values and norms - will lead to "defining your own meaning and telling to the world that this is what I mean" ~ the contours are already there, by the way!

Hope you wont ask "What Do I Mean?"
Posted by Navneet Bhushan at 2:56 PM No comments: