Future wars will require agile leaders capable of acting faster than the enemy to deal with complex and rapidly changing battlefields. “The military commanders must be able to see and understand their present state, establish a vision of future end state and to articulate a unifying concept of operations. Future battlefields will be more lethal, uncertain, confusing and with less time and increased consequences for decisions” [18]. However, on the battlefield it is our military commander’s intuitive decisions that will win the battles and ultimately the future wars for us. There is a need to assist this intuitive decision making capability of our commanders in compressed time. This assistance is possible through development of realistic mathematical models incorporating the detailed battle parameters.

The new and future battlefields will be highly non linear. The old concept of sequential battle front (see Fig 1) has been replaced by Follow-on-Forces Attacks (FOFA), Strike Deep Strike Hard (SDSH) and Air land battle doctrines (see Fig 2). In these doctrines, battle front is considered not only the immediate engagement area, but whole space and all those elements in that space which support enemy’s forward deployed forces. These war execution ways calls for hitting deep inside enemy territory - way behind the immediate fronts where the actual combat between regular forces is taking place. It involves, hitting enemy Command and Control centres, Surveillance and Reconnaissance systems, Logistics Support System and Strategic Units, etc. 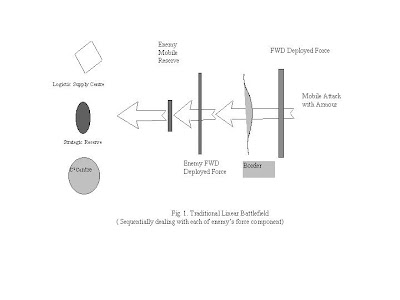 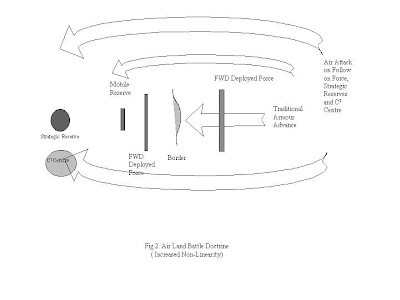 The future forces will be deployed as shown in Fig 3. There will not be a clear enemy in the traditional sense of combat troops, reserves, armoured division etc. Instead, enemy military force will be based on small, independent, highly mobile and highly integrated fighting units. It will be imperative for the attackers to destroy not only the fighter units but also the integration links. The basis of this integration will be the Command Control Communication Computers Intelligence Interpretability Surveillance Reconnaissance (C4I2SR) system, Space and Electronic Warfare (SEW) system and Integrated Logistics System (ILS). Therefore, a shift from linear to highly non-linear battlefields will reshape the future warfare. 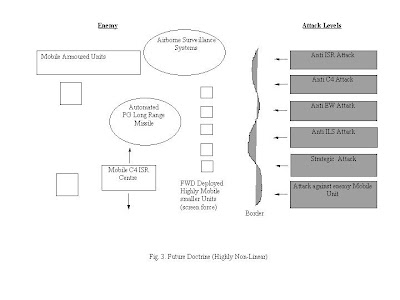 HOW TO MAKE BUSINESS NON-LINEAR?

Posted by Navneet Bhushan at 2:16 PM No comments: Links to this post

About a decade back I wrote an article Future of Warfare - A Search for Military Doctrine.

War should be avoided as far as possible. The “avoidance of war” and the ways to do so, are in the realm of diplomacy, foreign policy and foreign relations. This is called the Political Doctrine of the country. It is however possible that the political doctrine of a country may call for war to attain a political objective. How to support and sustain war is the domain of what is called an Economic Doctrine. The main aim of this is to develop the economy and support the growth of the country. It should also be oriented to create capabilities and resources to sustain a nation’s military and political doctrines. The Military Doctrine is concerned with the ways of execution of war. An essential input to war making is the ability to collect, process and disseminate information and intelligence for timely and accurate decision-making. This is called the Intelligence Doctrine. Modern wars have an inherent threat of use of Weapons of Mass Destruction (WMD) which requires a clear cut policy i.e., a WMD Doctrine. The fourth dimension - space, is going to play a major role in future wars. Therefore, a clear-cut formulation of Space Doctrine is called for. The new reality of internet and real time media influence calls for formulation of a cyberwar doctrine to take care of Information warfare requirements. Fig. 2 shows the domains of various doctrines and their aims for maintaining the integrity and defending the interests of the nation.

It must be mentioned here that the compartmentalization of knowledge and planning related to war, into so many diverse doctrinal frameworks, has been done for the ease of studying them and highlighting the relations between them. For meeting any challenge to the national security or interests a total response comprising of inputs from all these doctrines is called for. The total response comprises of actions taken within the purview of all these strategic dimensions of National Planning related to war.

Making Multi-Sourcing work will eat up lot of band width of the companies that are choosing that route. Given the trend as reported by Gartner, multi-sourcing is the name the game.

Step 1: Granularize work
Step 2: Look at the work elements and their interdependencies - How - Using the Design or Dependency Structure Matrix (DSM)
Step 3: Use a Value Model to understand and quantify the value of each player in the multi-sourcing scenario
Step 4: Use a Multi-criteria decision making technique (Analytic Hierarchy Process - AHP) comes to mind
Step 5: Using Lean Concepts of Value, Value stream, flow and pull to make work happen

This is a tough ask - to put is mildly! Are the players ready!

Posted by Navneet Bhushan at 12:36 AM No comments: Links to this post