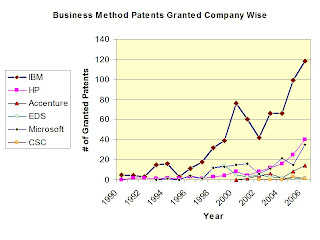 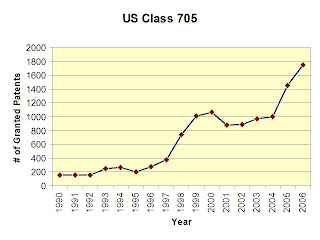 One of the most controversial Patent rights granted by United States Patent and Trademark Office (USPTO) in recent past has been the Business Method Patents. These patents rights belong to the US Classification class 705. It is defined in the USPTO schedule as part of data processing field.

The problem is that no other country grants patent rights for the Business Methods that this class describes. The trend that started with granting of software patents has continued with Business Method patents

A Patent right is an Intellectual Property right given to an inventor or his assignee, for an invention that is new or novel, has industrial application or is useful, and has an inventive step or is non-obvious to a person skilled in the field of invention. The right associated excludes any one else to exercise the invention for a limited period in the specific geography where the protection has been granted. The Patent rights have traditionally been given to industrial and technical fields such as chemical, mechanical and later on electronic fields. The software field has been a late entrant to the patent subject matter – started by the US federal courts and to some extent US PTO.

Two important arguments in favor of software related inventions propagated are –
All technologies are equal and hence Patent System should treat all fields with same lens
Although software industry was innovative even without Patents, the patents improve Research and Development (R&D) incentives by increasing Return on Investment (ROI).

The method of doing business patents - classified as US PTO class 705, are not only much more complicated but have much more difficulty in invalidating using the novelty and non-obviousness tests of the classical patent system. These so called Business Method Patents (BMP) use computers, electronic networks and Internet technologies to create different ways to transact, exchange information, create and display product catalogues, enable secure money exchanges, trading, etc for people across geographies. The geographical independence of these patents is a totally new dimension that the Patent Laws – which by definition are geography dependent, have to take care of. USPTO grants these patents, while rest of the world does not as yet. However, the methods of doing business over Internet, mobile data networks, satellite networks, etc, transcend multiple geographies. How and which laws will be relevant and applicable if the networks on which the BMP operate are based out of multiple geographies? These are not only serious challenges but require a thorough understanding, study, analysis and harmonization of multiple legal systems and Patent Laws to create a fair, just and innovation facilitation IP system in the world.

Trends of Business Method Patents Granted by USPTO (1992-2006)
A first order search of USPTO (http://www.uspto.gov/) provides the two graphs shown above. All the major IT companies are moving in this area rapidly, led by the ever eager IBM. May be here in lie the reason that Indian software companies - the much mentioned success mantras - may have hard nuts to crack in future - by the way, future is always NOW! Hope this is a strategic awakening call for Indian Software Companies !!!
Posted by Navneet Bhushan at 11:16 AM No comments:

Posted by Navneet Bhushan at 8:39 AM No comments: